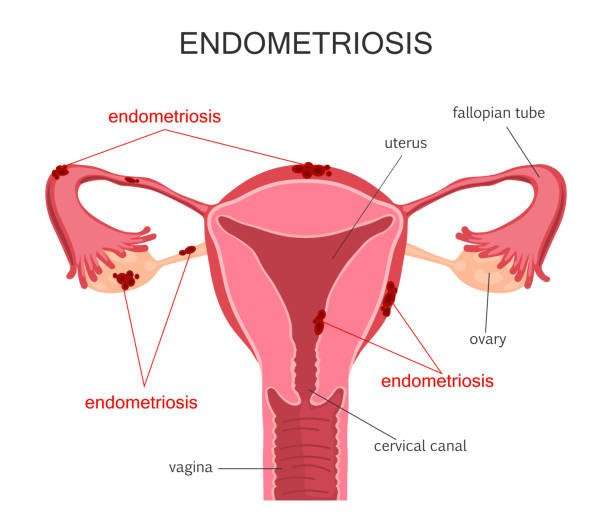 I was born in 1975, and it was chaos, a mother that left me when I was two and my father with mental health issues. I didn’t receive the best of care. My father re-married my step mum, but that didn’t last, and he left my step mum and me with a newborn baby and my siblings.

When I was thirteen, it was coming to the time when children start to have body changes. I was desperate to start my period and become a woman. I remember pretending my period had begun to fit in with other girls at school, but in reality, they didn’t start until I was seventeen.

At seventeen, my life was manic; my period had started and had an explosion of feelings. I couldn’t cope with the stress and anxiety and ran away to a university by getting onto a ‘fine art degree’.

Looking back, this was endometriosis rearing its head, but I did not know what that was and hadn’t ever heard of it. I thought all my feelings were down to the fact I had depression from my family background.

I found myself in bed with enormous amounts of pain and was crying out loud. I just thought I was weak and pathetic. I was very good at putting myself down at that age.

After going to my doctors, they put me on the contraceptive pill to manage my periods. Little did I know, I would be stuck on this pill until I was forty-two.

When I got to the age of twenty-five, I found myself pushed into a position where my boyfriend wanted me to help pay the bills, but unless we agreed together. I couldn’t come off the pill because I wouldn’t be able to work fulltime.

Over the years and many trips to the doctors, I was talking about my problems. Such as having depression, having high levels of anxiety, constipation, mood swings and skin rashes. The doctors were always very rude to me and made me feel I was a nuisance.

Once I found I had endometriosis, all these symptoms made sense to me as everyone with endo has all those issues.

Endometriosis can push you into early menopause as your hormone levels are all out of kilt and high in estrogen. So this would explain my massive mood swings.

At the age of twenty-nine, I split up with my boyfriend for a few years because my mood swings were extreme.

Moving on a few years and my boyfriend and I got back together. Things started to get even worse. I found myself collapsed on the floor with horrific pain. I became extremely ill and couldn’t even walk across the living room without having extreme pain.

It carried on for three months, with me going back and forth to my doctors and struggling to get any support and getting told ‘no’ when I asked for a referral to see a specialist.

I was desperate for answers and started using the internet and Facebook groups for source help and support. It was then when I found about the disease endometriosis.

After learning about this disease, I had no choice but to pay two hundred and fifty pounds, to see a private endometriosis specialist.

He straight away said, I had endometriosis and said I need a hysterectomy. I was pleased to hear this and was happy as I was in safe hands. He then referred me to have the operation with the NHS.

I had to wait another nine months for my operation and spent the entire time in bed seriously ill. I do think this disease causes havoc in our society. Women go crazy and argue and split up with their partners, as they do not know about this disease.

I feel this is an issue that has been ignored on purpose, as it doesn’t suit the capitalist society. It’s easy to patch women up with pills, rather than to sort out the root cause.

I’m pretty sure if men had this issue, they would be supported and helped, maybe I’m cynical. I’m now a year and a half after my operation and feel so much better. The endometriosis hasn’t completely gone and have an issue with pain but not as much as it was.

I have to eat very healthily to keep the pain at bay and have a strict diet. I cannot eat eating gluten, lactose, soya, sugar, onions and raisins.

Anyway, I’ve written this and thrown it out to the internet to help educated people on this disease.